The Colorful Murals of Ludington

Anyone can read about the history of a town, but here in Ludington, our history is displayed in a unique and rather large manner. Within the downtown region, several murals grace the façade of local area businesses.

Ludington Mural--downtown Ludington on east side of blue building

This colorful mural is no longer on display as the buildings that it was painted on were torn down in late 2018. Local artists Andy Thomas and Scott Bentz primed the wall and spray painted the outline in July 2014. During the final Friday Night Live, visitors and residents were asked to help paint and complete the mural. It featured the word Ludington, lighthouse and waves. The other side of the blue building featured a "Love Ludington" mural, done by Colleen Barber. And another community mural was located on the side of the building across the community garden area. Prints and stickers of the artwork are available for purchase by visiting downtownludington.org with proceeds benefiting the Legacy Plaza (formerly James Street Plaza) project. 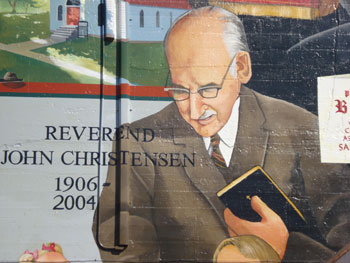 Reverend John emigrated to the U.S. from Denmark at age 20, and touched the lives of Mason County residents for 65 years. He served as pastor of Bethany Lutheran Church from 1938-1972, except for two years he spent in Connecticut. After his retirement, he happily continued to minister at weddings, baptisms, and funerals. He also faithfully visited the sick in nursing homes and at the hospital. He was known for the miniature Bibles he would leave with those he tended to. 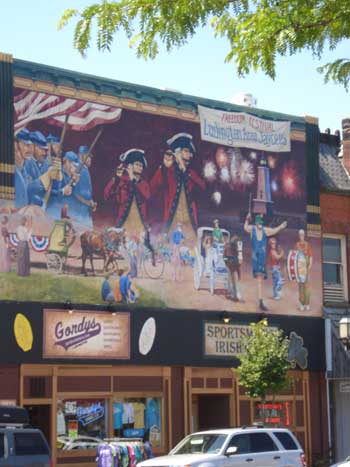 July 4th has been celebrated in Ludington since 1874, and this mural depicts scenes from the Freedom Festival through the years. It is a multi-plane representation of the various celebrations--one panel shows local Vietnam veterans marching in the 1986 parade. The lower portion of the mural is a progression of images--a 1900s parade scene, "Uncle Sam" on stilts, and three members of the Scottville Clown Band: Big George Wilson, Jim Pinkerton and Ray Schulte. The upper portion of the mural are Civil War reenactors of Company D, 1st Michigan Light Artillery marching in the 1986 parade, and finally the fireworks over the North Breakwater Light, which occurs every July 4th. 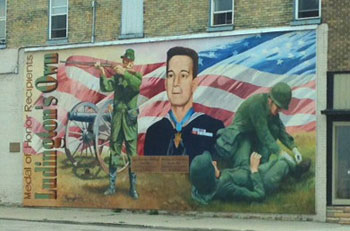 This honors two Ludington residents who have been recipients of the Congressional Medal of Honor. Charles DePuy received his medal for bravery under fire in the famous assault at Petersburg, VA in July 1864. William Charette, a naval medical corpsman, was decorated for aiding his wounded Marine Corp comrades under heavy enemy fire in Korea in 1953. The portrait of Charette on the mural is based upon a photograph taken just moments after he received his medal.

Father Jacques Marquette is a well-known French missionary from the 17th century. In 1673 he accompanied Louis Jolliet on a voyage by canoe to explore the Mississippi River, but on a later trip in 1675, he became ill. They tried to bring him back to the mission at St. Ignace, but he asked to be brought ashore near the present site of Ludington. Here he died and was buried. A shrine in the form of a cross marks that very spot where Father Marquette died. His remains were later moved to St. Ignace in 1677 by the Kiskakton Ottowa Indians. There is some controversy over where Father Marquette actually died. Historians in two other Michigan cities claim that he died in their communities; however, history seems to point to Ludington, MI as his death site. 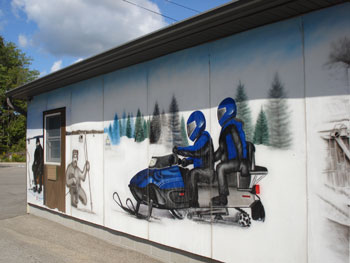 This mural depicts the history of Hamlin Lake, from its lumbering days to the recreational paradise it has now become. It focuses on the logging era from 1856 to 1912, showing horses hauling lumber along the Big Sable River, and also features the building of the 1913 Hamlin Dam. After damming Big Sable Lake, it was renamed Hamlin Lake, after Abraham Lincoln's Vice-President, Hannibal Hamlin. Hamlin Lake covers more than 5,000 acres and is over 12 miles long. It has become a favorite family destination during the summer months. 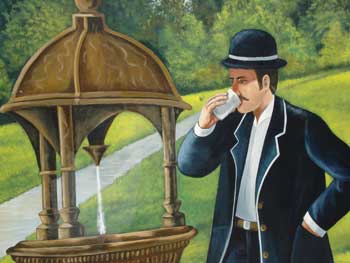 Appropriately placed, this is a painting of William Rath, a former mayor of Ludington and one of its most exemplary residents. He is shown drinking from a "Fountain of Youth," something that was in vogue in the late 1800s. Rath and Judge Charles G. Wing founded and established the Ludington State Bank and later the Fountain Bank in Mason County. He and Antoine E. Cartier (a famous lumberman) acquired Cartier Park near Lincoln Lake, and upon his death, bequeathed $25,000 for the improvement of Cartier Park. He was also instrumental in bringing the Star Watch Case Company to Ludington. A second mural in this location features Ludington's legendary Paul Bunyan, Ossawald Crumb. 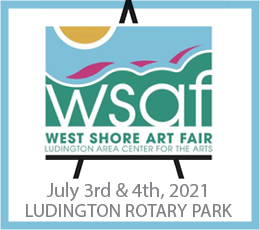 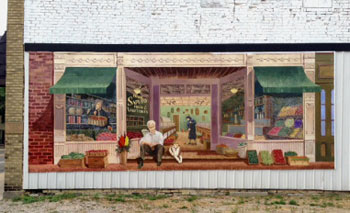 Saputo's Italian Market was located on South James Street and featured fresh local fruits and vegetables; the market was operated by Frank Saputo and his two sisters, Rose and Jennie Saputo. They supplied fruits and vegetables to the carferries. This mural was originally located on the front of Luciano's Ristorante, but has now been moved to the side of The Q Smokehouse, at 225 S. James Street. 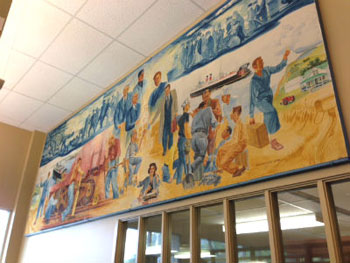 This mural is a collage of scenes from the carferry era. At the time this was painted, Ludington had 6 carferries. In one corner of the mural, a young man leaves the farm to work on the car ferry. It also shows workers loading railroad cars onto the S.S. Badger. Another corner shows the young man returning to the farm with his paycheck to buy a new tractor. Upper left corner focuses on wealthy owners boarding the Badger. Now there is only one carferry operating out of Ludington, the S.S. Badger, which crosses Lake Michigan every day during the summer to Manitowoc, Wisconsin. 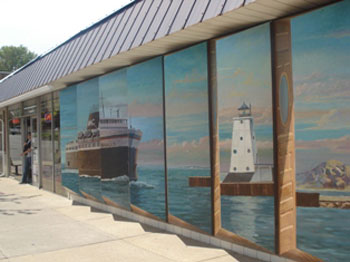 Perhaps the most unique mural, this shows the S.S. Badger carferry sailing by the Ludington North Breakwater Light (IF you look at it from the right!) It has a "louvred" effect, so if you look at it from the left, it looks as if you're peeking through "doors." Nothing says "Ludington" more than its beloved carferries--in their heyday, 14 of these ships sailed in and out of port, including the Pere Marquette fleet and the City of Saginaw, City of Midland, City of Flint, Spartan, and the only one still running--the S.S. Badger. 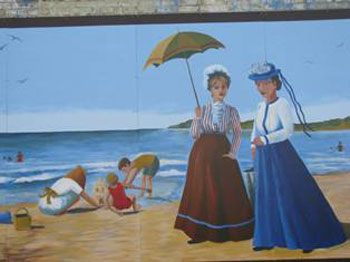 This mural is a depiction of an old-fashioned beach scene in Ludington. It shows two women with a parasol walking along the shoreline, while children play in the sand. Besides the carferry, beaches are an integral part of Ludington. You can find numerous, expansive beaches in the area...from Stearns Park out to the Ludington State Park. People enjoy the sugar sand, the clean, fresh water of Lake Michigan, and the many activities that can be enjoyed along the shoreline.

Artist: Kelly Meredith
The title says it all, as Ludington is a haven for outdoor enthusiasts. Fishing, hunting, swimming, skating, snowshoeing---it's available all four seasons for people of all ages. This mural, painted on panels by Artist Kelly Meredith, is displayed adjacent to the Max K. Rahn building.
Depicted on the mural are familiar names to those residents who have been around a while, like the ice skating Lori Dolson, Bill Genter with his snowshoes, trapper Dick Donkowski, hunters George Reed & Wally Worten, Julianne Gronowski on her bicycle, swimmers Diane & Jim Hoover, and golfers Robert Lefler & Lisa Doerr, and of course, fisherman Robert Taylor.

For more activities & attractions, check out these additional links for Things to Do in West Michigan:

Ludington Activities & Things to Do -- Play on a beautiful beach, take a tour at Historic White Pine Village, or explore the barn quilt trail, murals or sculptures in the county--Ludington offers many fun things to do for the entire family!
Have Fun in Manistee, Michigan -- Explore Manistee's historic downtown district and riverwalk, hike the Manistee National Forest, canoe on the Manistee River, and more.
Hamlin Lake -- Just 4 miles north of Ludington, Hamlin Lake is a great destination for boating, fishing and climbing dunes! The Hamlin Lake shoreline is also part of the Ludington State Park.
Silver Lake Sand Dunes -- Visiting the Silver Lake Sand Dunes makes for a terrific vacation because you can take your off-road vehicle for a spin on the scenic sand dunes overlooking Lake Michigan and Silver Lake.
Things to Do in Pentwater, Michigan -- Nothing is quite like the quaint, artsy, harbortown village of Pentwater. Don't miss the popular Charles Mears State Park beach on Pentwater's Lake Michigan shoreline.
Lots of Activities in Scottville, Michigan -- Explore the Riverside Park along the National Scenic Pere Marquette River.
Canoeing or Fishing on the Pere Marquette River -- Many boat liveries offer canoe rentals.
Also, check out West Michigan Guides and our locally produced WestMichigan.MichBiz.com directory for our largest lists of Things to Do in West Michigan.